New UAV Tanker for the US Navy 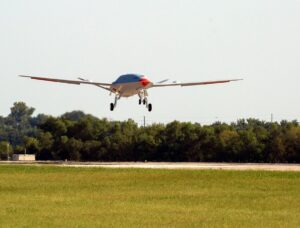 In September 2019, Boeing conducted a demonstration flight of UAVs for refueling in the United States.

The name of this unmanned deck tanker is MQ-25 Stingray. It is equipped with a turbofan engine with a lifting force of 4.5 tons.

This UAV was realized on an order from the US Navy, which provided Boeing with more than $800 million to develop four MQ-25A UAVs for refueling of aircraft (deadline for delivery – August 2024).

The US Navy’s program to create a tanker UAV replaced the UCLASS (Unmanned Carrier Launched Airborne Surveillance and Strike) program, that was essentially failed because the capabilities and performance of the UAV at nowadays level of technology development were insufficient.

The need of creation of a deck tanker is especially relevant now as in 1997 the deck tanker Grumman KA-6D Intruder was disarmed (now the task of refueling is entire lays on the fleet F/A-18, that constitute almost a third part of the total raid hours and thus reduces the impact capabilities of aviation groups in general).

In case of successful implementation of this order, the US Navy promises to expand funding to $ 13 billion and order another 72 refuelers.